Heretical Pilgrims, or You Can't Keep a Good Man Down

ON THE EVENING of November 12, 1958, Warren Harding, Wayne Merry, and George Whitmore surmounted Yosemite’s El Capitan, having made the first ascent of the 2,900-foot Nose route — a campaign of 47 days spread over nearly 18 months. When Harding, the leader, returned to the valley floor, he was approached by a scrum of reporters seeking a statement from the conquering hero. Harding mouthed the usual pleasantries, but later wrote, “[I]t was not at all clear to me who was the conqueror and who was the conquered: I do recall that El Cap seemed to be in much better condition than I was.” 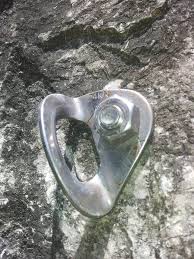 Understatement and mock humility were Harding’s stock-in-trade, as he was the Valley’s jester, trickster, and the founder of the Low Sierra Eating, Drinking and Farcing Society; he spoke in code to his fellow unwashed because he and his colleagues in Yosemite Valley certainly did possess the audacity to throw themselves at massive cliffs using techniques of their own invention, did view their acts as heroic, and were, in fact, engaged in an arms race for Yosemite Valley’s unclimbed walls. While their ambitions differed little from those who had challenged Yosemite’s walls before them, they were polarized by wildly divergent ethics and ideas about sporting means of ascent; the manner by which climbers viewed the Valley and their place within it had changed. Harding worked through the night on his final push to the summit of El Cap, drilling 28 expansion bolts to surmount an overhanging headwall, an act some considered heretical, and others, visionary. Harding had no qualms about using bolts; the climbing had been difficult, he had used bolts sparingly, and the quality of the route spoke for itself.

Or maybe not. Harding had climbed El Capitan, but how he did it revealed as much about the prevailing climbing culture in Yosemite Valley as it did about Harding.

Here, then, is the terrain Joseph E. Taylor explores in Pilgrims of the Vertical: Yosemite Rock Climbers and Nature at Risk, an examination of how place, play, and culture inflect interaction with a natural environment. His data consist mainly of first-person climbing accounts culled from the trove of climbing literature. “I am sure Yosemite’s pilgrims of the vertical have much to teach us about nature, sport, and culture” (64), writes Taylor, a professor of history and geography at Canada’s Simon Fraser University. “I can place stories in context to illustrate the connections between climbers and their times,” he writes, “and I can do this more dispassionately than people whose identities remain intrinsically bound to their play” (59). Risky business, this limning the literature of a culture as insular as Yosemite Valley’s climbing community; the Valley’s denizens have turned on outsiders who have tried to define them (Taylor says as much in the book’s first chapter, parts of which read like an apologia).

According to Taylor, the Victorian mountaineers who climbed Europe’s Alps subscribed to Romantic sensibilities about nature and sport; although they used local mountain guides, they valued mountaineering as a vigorous exercise in self-reliance; the heights offered transcendence, the journey’s trials built character, and good style meant climbing a severe route with minimal aids: Nature was to be met on its own terms. The male members of London’s Alpine Club were elites who wrote about their climbs, and their ideals influenced climbers abroad. East Coast-based climbers who had climbed with the English brought their ideas west, to the Sierra Club and Yosemite Valley.

But a funny thing happened on the way to Valley: the Alpine Club’s male-dominated culture gave way to a more heterosocial culture. On the practice cliffs in Berkeley and Los Angeles, and on the cliffs of Yosemite, male and female members of the Sierra Club’s Rock Climbing Section (RCS) joined one another in social but serious play. They harnessed new technologies and devised safety systems to better manage risk. “Yosemite Valley [became] less an escape from than an extension of civilization,” writes Taylor (1170). When younger, mostly male athletes interested in pushing their limits found the club to be overly hierarchical and rule-bound, they went their own way. As new athletes entered the sport, groups formed around the thought leaders and strongest athletes who defined their own ethical boundaries by invoking tradition (harking back to the Alpine Club) and morphing technology to the exigencies of Yosemite Valley’s geography. Some upheld tradition and others opposed it.

Taylor defines 13 types: Adventurers, Victorians, Pioneers, Members, Soldiers, Individualists, Experientialists, Moralists, Entrepreneurs, Dirtbags, Traditionalists, Consumers, and Survivors. Their worldviews overlapped, as did their cultural artifacts, all of which informed Yosemite’s cultural melting pot. Meanwhile, advances in technology, information, systems and gear ameliorated the risk of climbing. The availability of this matériel, however, created an existential double-bind for those defining themselves as athletic anchorites, according to Taylor. They needed the marketplace to practice their sport, but their attitudes were informed and mediated by the Valley’s powerful sub-culture, which dictated the ethics of serious play. “The goods, stories, and wilderness they consumed were the means to a personal relationship with nature,” writes Taylor (3545). Some climbers, like Yvon Chouinard, made fortunes in the outdoor industry and used their businesses for social good. Others, like David Brower, became leaders of environmental movements. “Mountaineering’s inconsistencies mirrored the tensions of modernity“ (243).

Though an outsider, Taylor may not be as distanced from the data as he claims. He’s obviously enamored of Yosemite’s cult of climbing; he’s climbed there himself, and he recounts at least two of his own passages up the Valley’s walls. The density of the narrative is testament to Taylor’s thoroughness (72 pages of notes), but by including so much material, chapters are tattooed with spur trails. When he might have been concretizing his Yosemite thesis in the final chapter, for example, he takes us to Utah’s Arches National Park to deconstruct a controversial climb to illustrate a relatively minor point; he could have dispensed with the point and kept the reader in California. As a climber, Taylor likely understands the dictum that “light is right,” and less is sometimes more. 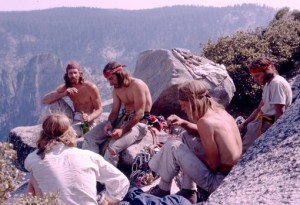 At the same time, he omits salient national history that might have had bearing on his taxonomy. The Cold War, The Wilderness Act, the Vietnam War, and Earth Day all influenced attitudes and norms, but these and other exogenous forces are either given short shrift or ignored altogether, when they might have been recruited to explain linkages between the general and climbing cultures. Taylor also ignores the prevalence of computer-mediated communication. These days, climbers are connected through electronic social networks and virtual communities. Information about climbing areas, routes and their histories – even the weather – are available online, and querying the Internet has become part of the climbing routine. Plenty of Yosemite climbers inhabit online forums and websites and utilize social media, and yet, neither Facebook nor Twitter is mentioned, nor are the influences of other popular sites, even though the book was published in 2010. Surely social media has influenced Yosemite’s climbing and consumer cultures.

But these are nits. In Pilgrims of the Vertical, Joseph Taylor succeeds in defining both a methodology and language for categorizing environmental attitudes dictated by behavioral norms inherited and developed by interacting with a bounded geography. Where and with whom we play matter, and as we play, so we live. So much rock, so little time. 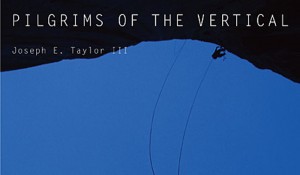