Euell Gibbons: No Grape Nut He

Madison Avenue turned Euell Gibbons into a lovable laughingstock, but Gibbons had the last laugh. By Brad Rassler 1534 words

THE AUTHOR AND FORAGER Euell Theophilus Gibbons once served as the folksy face of Grape-Nuts, the breakfast cereal that contains neither grapes nor nuts. The television campaign featured Gibbons delivering his now-famous “Ever eat a pine tree?” line, which catapulted him from darling of the back-to-nature movement to an unwitting victim of America’s pop culture. The script was penned, of course, by Madison Avenue pitchmen, lampooned by late-night comedians, and even parodied in later television shows and Grape-Nuts ads by Gibbons himself. (“You know, the other day I ate some goose poop I found on my lawn.”)

Sadly, the series of Grape-Nuts ads upstaged the lifework of a naturalist nonpareil, whose books sold well enough to provide him with financial security as well as fame among those interested in sating their appetites using the most basic of provender, such as the weeds that sprang up in their backyards. One autumn day in the late ’60s, the writer John McPhee set out with Gibbons to forage the wilds of Pennsylvania for six days and sixteen meals. They canoed a stretch of the Susquehanna River, walked a ways on the Appalachian Trail, and later traveled overland in Gibbons’s van, with Gibbons harvesting wild viands, like watercress, persimmons, walnuts, dandelions, oyster mushrooms, Jerusalem artichoke, mallory and billy buttons along the way. At first they carried nothing and lived on the food Gibbons found, but later introduced to their menu one staple a day, like salt, flour, maple syrup, cooking oil and bacon. The men weighed themselves at the beginning and end of the excursion. McPhee had gained a half a pound and Gibbons two.

No dumb luck that. By the time McPhee caught up with him, Gibbons had been identifying, gathering, cooking, consuming, and cataloguing food sauvage for over 40 years. In his 1968 novella-length New Yorker profile of Gibbons, “A Forager,”  McPhee extolled the naturalist’s plant knowledge and survival savvy, but also his scholarly approach to the art. “He sent wild food to Pennsylvania State University for analysis of its nutritive values. He read ‘The Journal of Lewis and Clark,’ ‘The Journal of George Vancouver,’ the observations of Captain John Smith on wild food, and read…ethno-botanies of the Iroquois, the Abnaki, the Menomini, the Cherokee, and other Indian tribes.” Gibbons had used foraging to put food on his table, sure, but he’d also made chronicling it his life’s work.

A few weeks after Gibbons died of heart disease 1975 at the age of 64, McPhee used The New York Times to skewer the Grape-Nuts campaign. “My purpose in writing this remembrance of him is to take those Grape-Nuts and blow them from here to Hawaii —to get him out from under them. If that were possible, Euell Gibbons would be left where he truly was – alone in the extent to which he advanced a special skill. He was a man who knew the wild in a way that no one else in this time has even marginally approached. Having brought his knowledge to print, he died the writer he wished to be.” 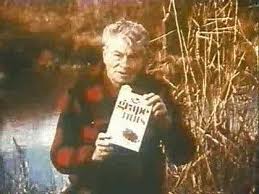 Gibbons was born in Texas’s Red River County in 1911. His mother taught him and his three siblings to forage. At five he’d concocted his first wild food recipe out of hickory nuts and hackberries. In 1922 the family moved to a dusty homestead in central New Mexico where the father bought tools, a few horses, cows, and chickens. They all six lived in a semi-dugout. As drought ravaged the land and the livestock slowly died, his father left to find work, and the family was left to fend for themselves on what meager rations they had. The mother took ill. Gibbons flashed back on his foraging lessons and wondered whether the land held any wild food. Most days he’d set out with an empty pack and rove. He found puffball mushrooms, lamb’s-quarters, and wild garlic. He learned to “fish” rabbits from their burrows with barbed wire. In this manner he kept his family fed for about a month until his father returned with money. Gibbons left home at 15 and migrated between Texas and New Mexico, working wheat harvests, panning gold, trapping, riding fences, digging postholes, carpentering, among other gigs (Gibbons would work a mind-boggling variety of jobs through his life, from school teacher to crossword puzzler to entertainer in a hobo camp). When he was 21 he caught a freight to California, and migrated throughout the state – San Bernardino, Los Angeles, Ventura, Lompoc, San Jose — as an itinerant carpenter-cum-hobo (he found the foraging in the Golden State lean). He did a hitch with the army, settled in Seattle, married, fathered two sons, and became a prominent member of the local chapter of the Communist Party (he was aghast at the poverty he’d seen and didn’t believed communism to be the best political expedient). He left alone for Hawaii and Pearl Harbor in 1939 to build small boats for the navy, and ended up staying for 14 years. He and  his wife divorced. He became a beachcomber, lived in a hut behind Diamond Head and sold what he gathered: fish, lobsters, guavas, coconuts, breadfruit, and more. He ranged the island and hunted wild pigs, wild goats. He became a kind of wild food bon vivant, throwing luaus, serving the food on banana leaves. He entered the University of Hawaii at age 36 to study anthropology and English, although he did not graduate. In 1948 he remarried. He became a Quaker. In 1953 he returned to the Mainland, where he found work teaching in a Friends school in New Jersey. By 1960, his dream of becoming a writer still unfulfilled, his wife offered to support him until he’d “won or lost his long conflict with that particular genie,” as McPhee put it.

He had been writing all along, just as he had been foraging: a few novels, short stories, sonnets. He met a New York literary agent and sent her his latest effort, “Mr. Markel Retires,” a novel about a poor schoolteacher-turned-wild food gourmand. She suggested he eliminate the fiction and concentrate on the foraging. He spent a year recasting the volume into a memoirish how-to handbook of more than fifty wild edibles, mostly vegetal. He highlighted berries, stone fruit, nuts, and fungi, as well as Japanese knotweed, chicory, and calamus, among others. He lauded especially the so-called nuisance weeds: purslane, burdock, dandelions, lambs quarters, and pig weed, the latter two related to the super-cereals quinoa and amaranth. In one chapter he assayed the caloric components of the common cattail (the “supermarket of the swamps”), from its starch-laden rootstocks (a fine breadstuff) to its spikes (boiled soon after harvesting and drench in butter), to its yellow pollen (perfect for pancake and muffin flour).

He salted each chapter with folk wisdom, stories, personal history, and effusive testimonials to each species. He wrote a two-page disquisition on food prejudice before describing the pleasures of crayfish, Terrapin soup, raccoon pie, potted muskrat, and woodchuck in sour cream. He devoted a chapter to medicinal herbs.

Stalking the Wild Asparagus, published in 1962, was singular enough to rate a New York Times review from restaurant critic Craig Claiborne. “The book might be called ‘The Best Things in Life Are Free,” wrote Claiborne, “because the author certainly conveys that impression, whether he is discussing the eminently edible qualities of wild mustard, May apples, or milkweed.” The book sold well, and Gibbons became the country’s foraging authority, a distinction that discomfited him. “He said that he had been haunted for as long as he could remember by a sense of fraudulence, and thought that he had created failure for himself time after time in hopeless servitude to this ghost,” McPhee wrote in the New Yorker profile. Renown and reward — ego and economics — would have paled to the simple and honest act of pulling a wild onion bulb from the ground. “Man must simply feel that he is more than a mere mechanical part in this intricately interdependent industrial system,” observed Gibbons in the first chapter of Asparagus.

While McPhee mused that Gibbons had no agenda other than to point out how most of the Earth’s good food cannot be found in supermarkets — Gibbons once told McPhee that “there is nothing I would rather do than eat my way through a roadside ditch” —  there’s a certain philosophy at play in Asparagus: foraging, Gibbons implies, nourishes both body and brain along with self-sufficiency. It’s a radical act in the era of industrial ag, a modest means of liberation from the muddle of modernity. A generation later the interdependent industrial system has scarcely changed.

He would go on to write several more “Stalkings:” Stalking the Healthful Herbs, Stalking the Blue-Eyed Scallop, Stalking the Faraway Places, and Stalking the Good Life; My Love Affair with Nature, but none of them would tickle the collective imagination like Asparagus.

Gibbons never stopped foraging. On one of those November days back in the late ’60s, floating the Susquehanna with McPhee, Gibbons spied a spray of riparian dandelions and produced a dibble stick to pry them from the earth.

“You act like a man who’s finding money,” said McPhee.

5 thoughts on “Euell Gibbons: No Grape Nut He”