Mt. La Perouse looms in the distance as the author rounds Cape Spencer on the outer coast of Glacier Bay National Park.

Over 20 years ago, yoga instructor Dennis Eagan set out alone to paddle the Aleut trade route, which skirts some of Alaska's most exposed and stunning stretches of coastline. After 15 years of solo exploration, he came away with something more than just memories. By Dennis Eagan 1934 words

THE CALL OF THE SEA is hard to resist. I became intrigued with the Aleut trade route in 1988, while reading George Dyson’s Baidarka. A year later, I moved to Alaska, became a kayak guide in Kenai Fjords National Park, and began to consider the idea of paddling the 1,000 miles of exposed coast that lay between Sitka in the state’s panhandle and Kodiak Island in the western Gulf of Alaska. Over the course of 15 years I chipped away at different legs of the journey, completing the final 300-mile Lost Coast section in 2006. The book, In the Wake of the Aleut, which will be published in 2016, offers a sea otter’s view of one of the most volatile and stun­ning shore­lines in the world, a region where land, water, fire, and air come together and spin their alchemy amongst each other to pro­duce some of our planet’s most impres­sive dis­plays of earth­quakes, tsunamis, explo­sive vol­can­ism, and storms. I hope to leave the reader with an appre­ci­a­tion for the earth as a liv­ing, breath­ing organ­ism. Here’s a sample.

I arrived at Icy Bay the following morning after a three-hour paddle. It didn’t seem far at all after a good night’s sleep. On an exposed shore like the Lost Coast that offers few opportunities to land, it’s prudent to take advantage of settled weather and log as many miles as possible. But it takes energy to unload the boat, establish camp, find water, and make dinner, tasks that are necessary to survive in the wilderness. The long push around the Malaspina Glacier yesterday had shown me my limits. Seventy miles from civilization was not the place to question my fitness level. But so far the Gulf of Alaska had been easy on me. In the future, I’d need to land before draining my reserves. Though it had been a short day’s travel to Icy Bay, I took an extra day there to give my body a chance to fully recuperate.

An hour west of Icy Bay, the sound of a diesel engine invaded the quiet ocean world. A logging truck carrying a load of fresh cut Sitka spruce trunks thundered along a gravel road two miles away, kicking up a cloud of dust in its wake. The trees would be bucked by chain saw, loaded on to a barge, and taken across the bay to a protected pier where the wood would be transferred on to an ocean-going vessel bound for Japan.

Above the road a clear-cut scar lapped halfway up the slopes like the wet sand mark left on a beach by a receding wave. With the exception of a few abandoned military bunkers, this deforestation was the first sign of human impact I had seen in over a thousand miles on the outer coast. Wrangell-St. Elias National Park stretches from Yakutat Bay to the Copper River, encompassing an area six times the size of Yellowstone National Park. Wrangell-St. Elias and its Canadian neighbor, Kluane National Park, together make up the largest mountain preserve in the world and are collectively designated a World Heritage Site—twenty-five million acres of wild set a side for future generations. But somehow a two-to-four-mile wide strip of land along the edge of the ocean failed to be included.

While the logging operation tainted the wilderness experience, it also dulled the edge of this committing coast. In the event of a mishap, I could have swum to shore, walked a few hundred yards through the woods, and stuck out my thumb by the side of the road.

A distant groan began to drown out the sound of waves slamming against the shore. The noise grew louder as I approached Cape Yakataga, where a herd of young male sea lions loitered atop the reef like a gang of punk teenagers on a street corner. Several of the bolder ones plopped into the sea and disappeared. A moment later, they surfaced in a pack and swam toward me in a swaggering way, their puffed up chests high out of the water. The smell of rotting fish filled the air as they confronted me with their bad breath and loud barks. Startled by an explosive snort, I turned around instantly, only to find a stream of bubbles rising inches from the boat.

One of the animals lost interest in me and swam back to the reef, where with a quick burst of speed he caught a wave and landed high on a rock slab, a technique kayakers occasionally mimic —not without risk—in difficult situations. We call it a seal landing.

Yakataga, a Tlingit word that means “within the reef,” hardly qualifies as a cape. Three or four rocky fingers extend perpendicular from shore for a half-mile, but barely a few feet above the water. When the sea is calm, they provide a natural breakwater: the best place to land a small craft on the 100-mile reach between Icy Bay and Kayak Island. Still, getting ashore here has never been a sure thing. A rough sea breaking over the rocks would make the narrow channels in the reef even more treacherous than the breakers on nearby beaches.

A narrow gap split the end of the reef. Currents boiled in the entrance, but the passage opened up after ten yards into a small amphitheater where the water looked more inviting. I eased in cautiously. Something didn’t feel right. I back paddled out to survey the scene a little longer. It was passable, but a large wave would have turned the alcove into an unfriendly place for a tired paddler.

I continued around to the west side of the reef and came across two more sea lions lazing atop a vertical sided boulder, eight feet above the water, a perch that even a human with opposing thumbs would have had difficulty attaining. The pair rose awkwardly, hobbled to the edge, and dove into the sea. They glided gracefully beneath me, banking and rolling through the clear water like birds in flight.

Steller sea lions, named after Georg Wilhelm Steller, the German naturalist who sailed with Vitus Bering and first documented the species in 1741, congregate at rookeries along the outer coast from mid-May to mid-July. The two-month breeding and pupping season takes its toll on the dominant bulls that can grow to eleven feet in length and weigh 2,500 pounds. They stay out of the water the entire time, defending a ten-square-yard piece of real estate. Any cow that wanders into that area becomes fair game for sex, and every male that crosses the line, must be repelled. Bulls are so busy mating and sparring that they don’t even have time to eat. Their huge surplus of fat allows them to survive the ordeal.

The western stock that ranges from the Gulf of Alaska to the islands of northern Japan experienced an 80-percent decline in population over the last four decades of the twentieth century, prompting the federal government to designate the Steller sea lion an endangered species in 1997. Marine biologists still do not know the cause. Diminishing food sources from overfishing is likely a contributing factor. Disease and predation by killer whales and great white sharks also threaten the sea lion. Pollution could very well pose the biggest danger: not only contaminants like oil but also entanglement in monofilament fishing line and the ghost nets, lost by the fishing industry, that haunt the sea. Over 100,000 marine mammals and a million sea birds die each year as a result of ocean debris.

And then there’s plastic. Plastic has become a scourge on the planet; global consumption now exceeds 250 million tons a year; ten percent of that ends up in the sea, where plastic works like a sponge, soaking up other organic pollutants such as DDT (dichlorodiphenyltrichloroethane) and PCBs (polychlorinated biphenyls) that persist in the ocean environment. Plastic’s blessing, durability, is also a curse. It degrades slowly from ultra violet sunlight, breaking down into smaller and smaller pieces, until only tiny clusters of molecules called polymers are left. In the sea these polymers resemble plankton. High concentrations of contaminants enter the bottom of the food chain when jellyfish ingest heavily loaded polymers, then the toxins accumulate in the tissue of other species progressing up the chain. Today many top predators like sharks, orcas, and dolphins often have such high levels of toxins that eating their meat would present a significant health risk.

Over the last decade, Gulf of Alaska Keeper, an organization dedicated to cleaning up marine debris from Alaska’s coastline, has removed over a million pounds of trash from gulf coast beaches alone. But a lot of the plastic that ends up in the ocean never returns to shore. The vortex of the North Pacific gyre collects debris like the whirlpools I encountered near Hubbard Glacier capture ice, but on a much grander scale. Three and a half million tons of plastic pollute an area twice the size of Texas in the Central North Pacific. Water samples taken in 2001 from what has become know as the Great Pacific Garbage Patch revealed that particulates outnumbered phytoplankton six to one.

I left the sea lions and surge of the outer reef behind and entered an inviting corridor of flat water ten yards wide. A hundred yards later, my kayak, “ET,” nudged the beach where the pulse of the sea beat gently on the sand.

Looking west, I envisioned a fleet of Aleut kayaks extending all the way to the western horizon. On the voyage from Kodiak, the natives must have arrived here exhausted after hours of paddling against the combined forces of east wind and Alaska Current. I imagined a thousand or more paddlers coming ashore here with no one around to celebrate their victory: surviving another day in the North Pacific. 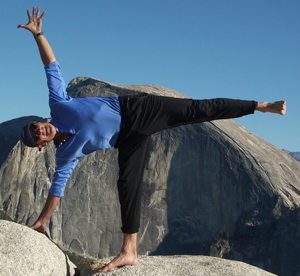 Dennis Eagan, the author of In the Wake of the Aleut and the founder of Wild Yoga, was a wilderness guide and outdoor educator before moving to Berkeley, California to study yoga with Rodney Yee. In 2004 he moved to the foothills of the Sierra Nevada, where he lives with his wife, the visual artist, Andie Thrams, and two cats. Dennis is a sought-after guide, yoga instructor and presenter. He is writing another book about the wild nature of yoga.